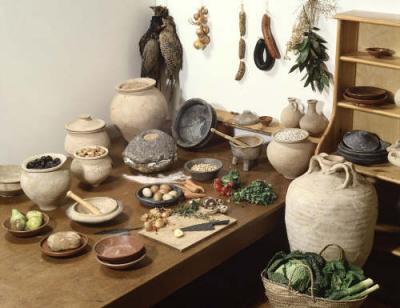 This is an East Oxford Community Classics Centre project which enables pupils from Cheney School to learn about and produce ancient Greek and Roman dishes! Pupils will get the opportunity to work with professional chefs, Roman Archaeology specialists, visit a heritage site and a local restaurant, and then work as a team to create a Roman banquet as a culmination of the project!

We are extremely grateful to the generous funding provided by the Oxford Classics Conclave for these sessions.

The project kicked off on 8th September with a workshop delivered by Dr Zena Kamash, Lecturer in Archaeology at Royal Holloway, on the ancient Roman diet.

The team, led by a local classicist and chef Laura Martin, have since been learning about and cooking a variety of ancient Roman dishes over a series of 12 weekly afternoon sessions. Dishes have so far included Pompeian Bread, Cretan Gastreen, and even snails!

Students received an interactive talk on how the ancient Roman diet compared to the modern Roman way of cooking; they then had the opportunity to make some Roman flat bread, and to experiment with creating different types of pasta. They were fascinated with the various types of pasta that could be created, and they decorated some tables with the various different shapes!

They also received a detailed behind-the-scenes tour of the kitchens and restaurant, explored the process of how the pasta meals are cooked, and then were able to sit down to a delicious bowl of spaghetti bolognese at the end. They all also got to take home the flatbread that students had helped to make earlier in the trip.

The trip was greatly enjoyed by all who took part, and we are very grateful to Jamie's Italian for their warm and welcoming hospitality and fantastic workshop and tour!

Subject to further funding, we hope to offer ancient cookery sessions to the local community as well in 2015!