The East Oxford Community Classics Centre has been delighted to have been running an exciting Roman mosaics project at Cheney School's Design & Technology department, which started in January 2014. We have designed and produced a mosaic which is displayed in the lobby of the Lane building where the classics centre is housed. We are extremely grateful to the Oxford Classics Conclave for providing funding for this exciting project!

The project started with a talk by Dr Will Wootton, lecturer in Roman Art at King's College London. His talk was incredibly detailed and wide-ranging. It covered all aspects of mosaics from what they are, what they look like and where they’ve been found, to how they were constructed and what happened when a group of Roman “cowboy contractors” had a go at making them!

There were many beautiful slide images showing the vivid colours and elaborate designs of existing mosaics and even an image of a catwalk show at the end showing how this ancient art form continues to inspire designers today. Dr Wootton also brought along some original Roman mosaic pieces (or “tesserae”) for the group to look at and handle. 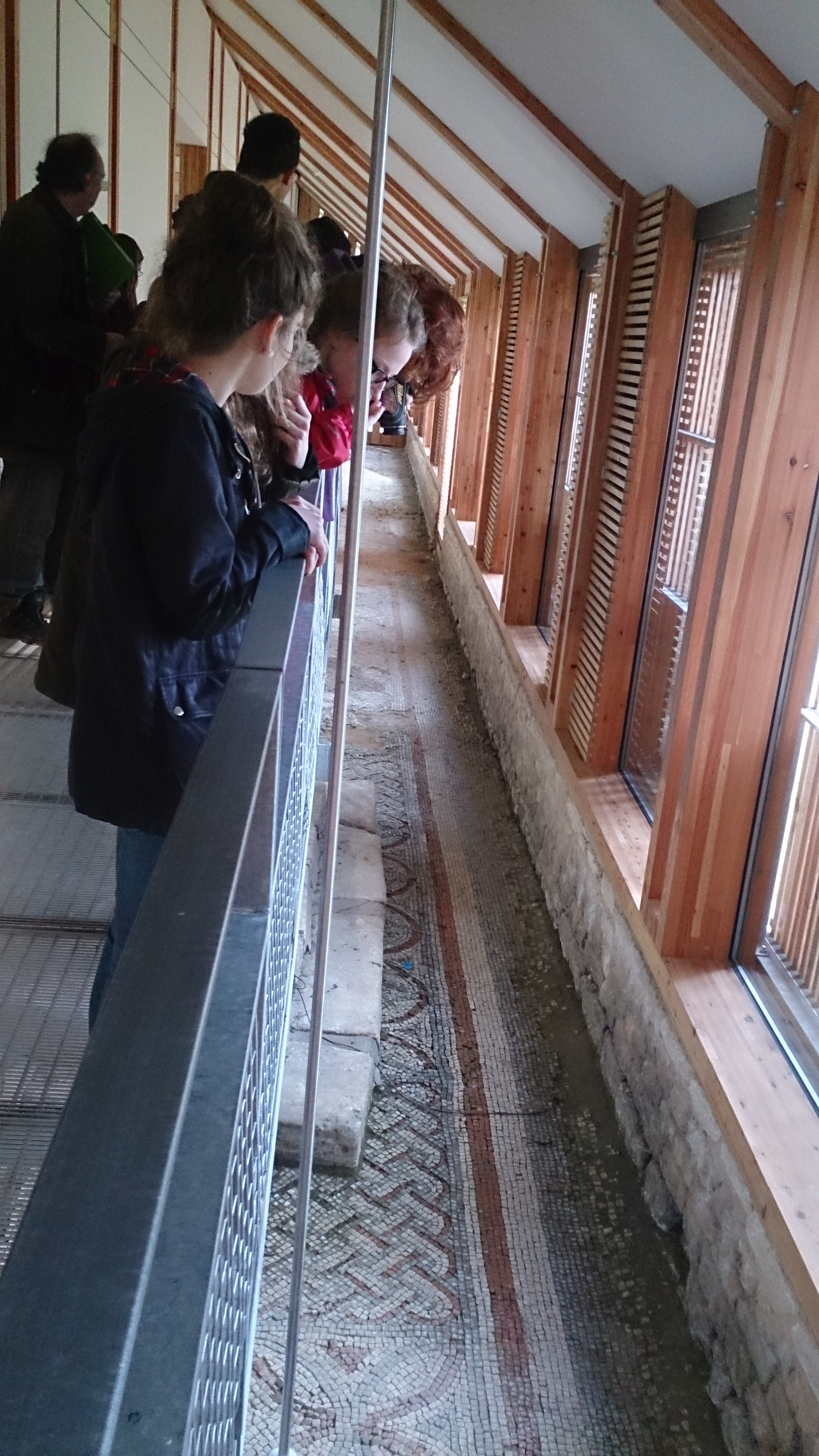 This was followed by a trip to the Roman villa at Chedworth and an interactive workshop and guide to the mosaics and the Romans. Pupils got to hear a talk on the history of Roman mosaics and then a guided tour of the remains at the site by an expert from the National Trust. A stunning corridor mosaic has recently been excavated at the entrance to the villa and students also got to see the remains of the Bath houses, dining room (known as a ‘triclinium’ since meals were eaten on three couches in the room) and toilets, amongst many other things.

Erin Stewart observed “I learnt that parts of the mosaic would be made off-site and added to the full design later on”. Beth Aveyard commented “The most interesting part was when we were looking at all the floor mosaics and especially the one of the four seasons, which was found by a ferret driving rabbits out of their holes for hunters!”. 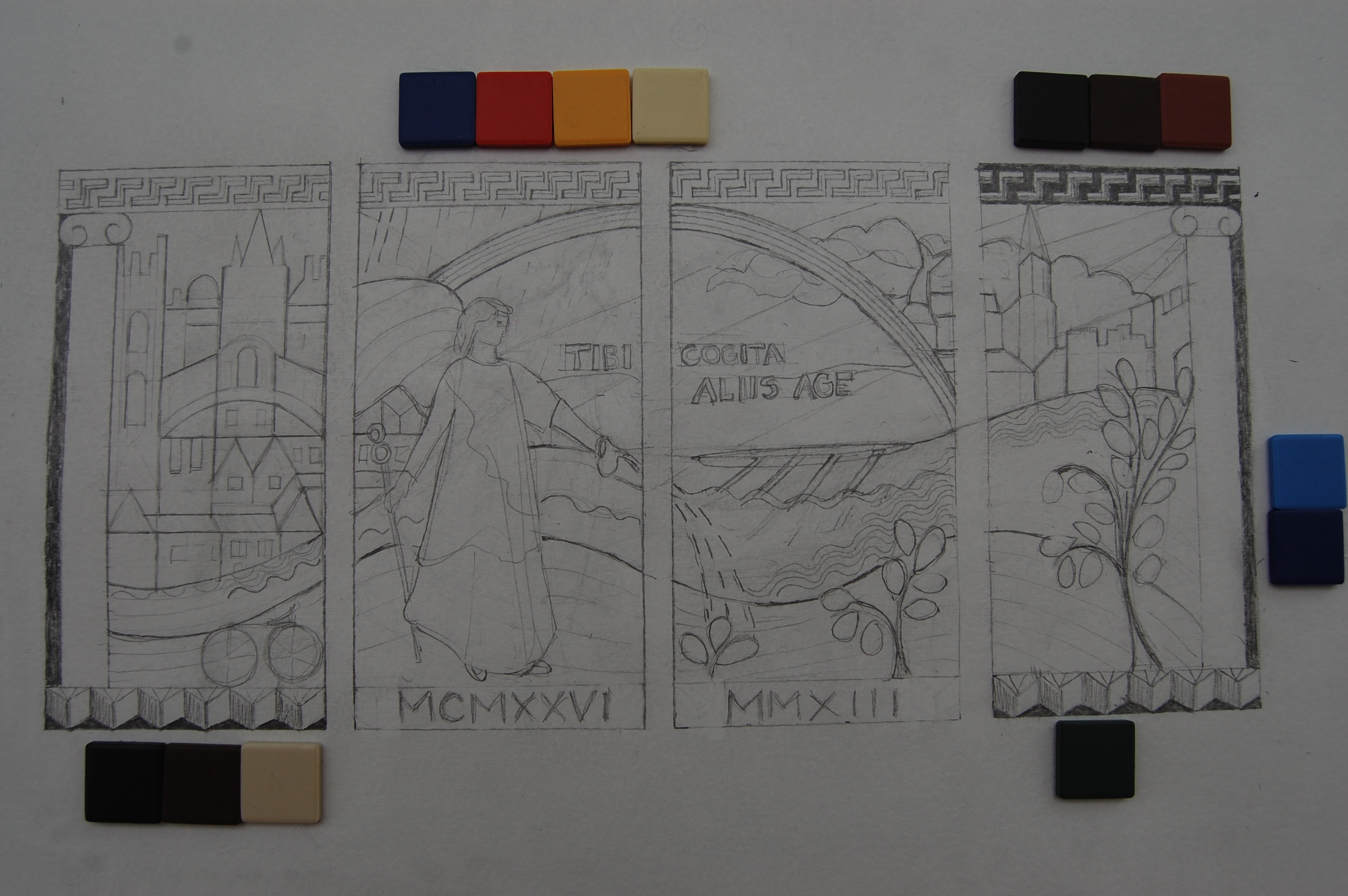 The team of Cheney students, led by mosaics expert Clare Goodall and assisted by Katy Pike, a local artist and Dr Lorna Robinson, the EOCCC director, then had the task of designing and constructing the mosaic! We held two sessions exploring ideas for what might appear in the mosaic – Dr Robinson introduced students to classical and local myths, and pupils all gave their views on what they would like to appear on the mosaic. Clare then drew up a design image for the four panels which incorporated the students’ ideas, including a backdrop of Oxford city, the Headington shark, a mini and a bicycle, the River Thames flowing through all the panels, open books as a pattern at the base of the panels, the goddess Iris and many other elements.

Students also had some practice sessions where they learned from Clare Goodall how to cut tiles into the right shapes, and how to create different styles and effects using tile arrangements.

The first elements of the mosaic to be made were the leaves. Each student made one or more leaves by choosing any assortment of tiles – all of which were bits of recycled pottery – and then arranging them however they liked into the shape of a leaf. The leaves are meant to be laurel leaves to represent Ancient Rome. They are also there to symbolise the growth of children as they journey through the school. These leaves were stuck onto mesh before then being peeled off and stuck onto the wooden mosaic boards – this is called the “indirect method”.

Two of the wooden panels were started simultaneously – one featuring the Oxford backdrop and one featuring the goddess Iris. Clare drew the designs onto the panels using pencil, and writing instructions where relevant. 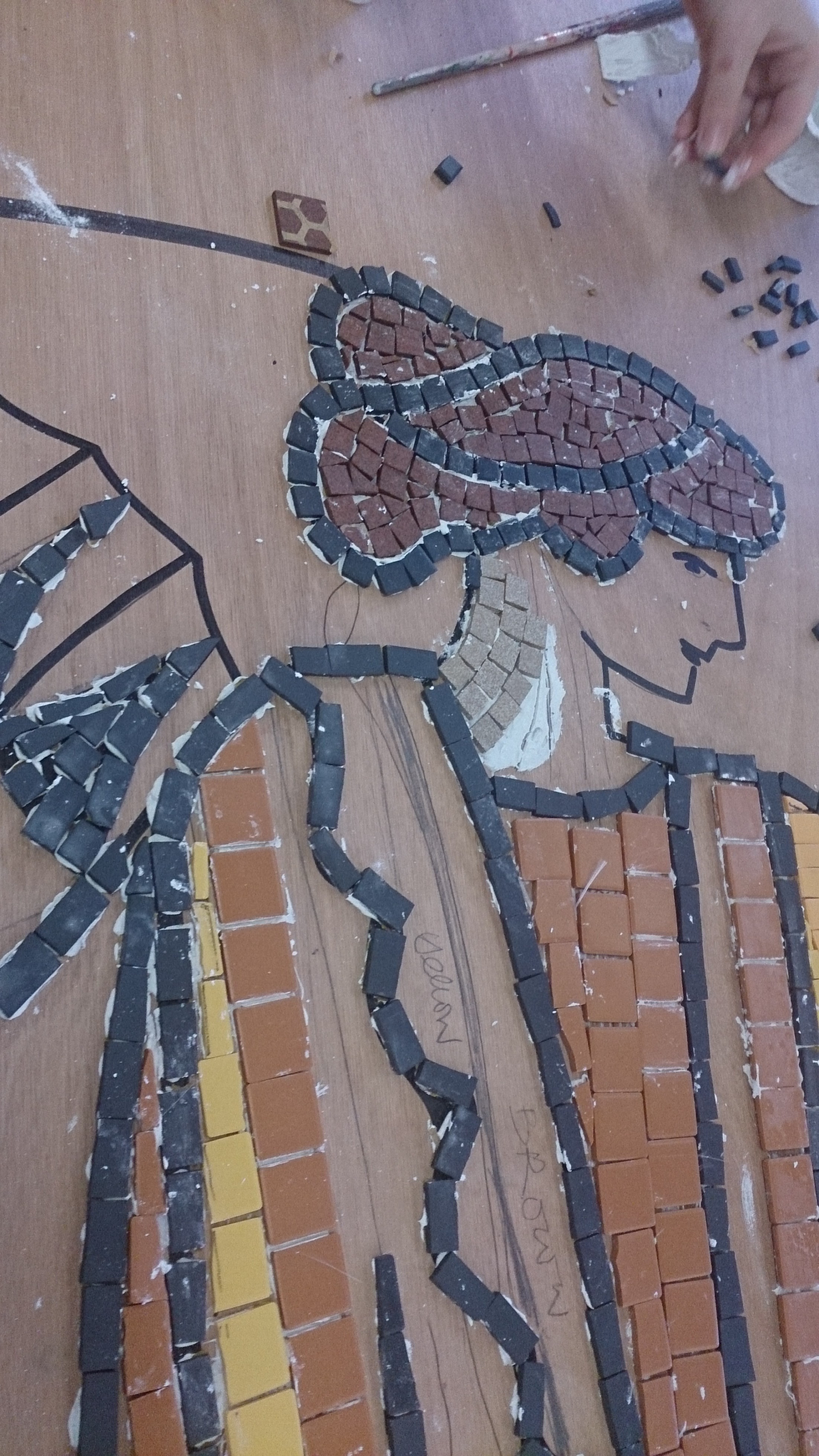 The goddess Iris herself was created using traditional unglazed “tesserae”, apart from her wings which were given an eye-catching, modern look using mirrored glass in a bronze colour. The sky and rainbow behind her were also in glass to create a contrast against the unglazed ceramic tiles.

The writing on one of the panels reads “tibi cogita, aliis age” which means “think for yourself, act for others” which is the Cheney School motto. It appears in a traditional Roman style font. At the base of the middle two panels two dates were created in Roman numerals. The first, underneath Iris, reads “MMXIII” which represents the year 2013, when the East Oxford Community Classics Centre was opened. The date on the other panel underneath the Cheney School motto reads “MCMLVI” for the year 1956, the year that Cheney School moved to its present site. 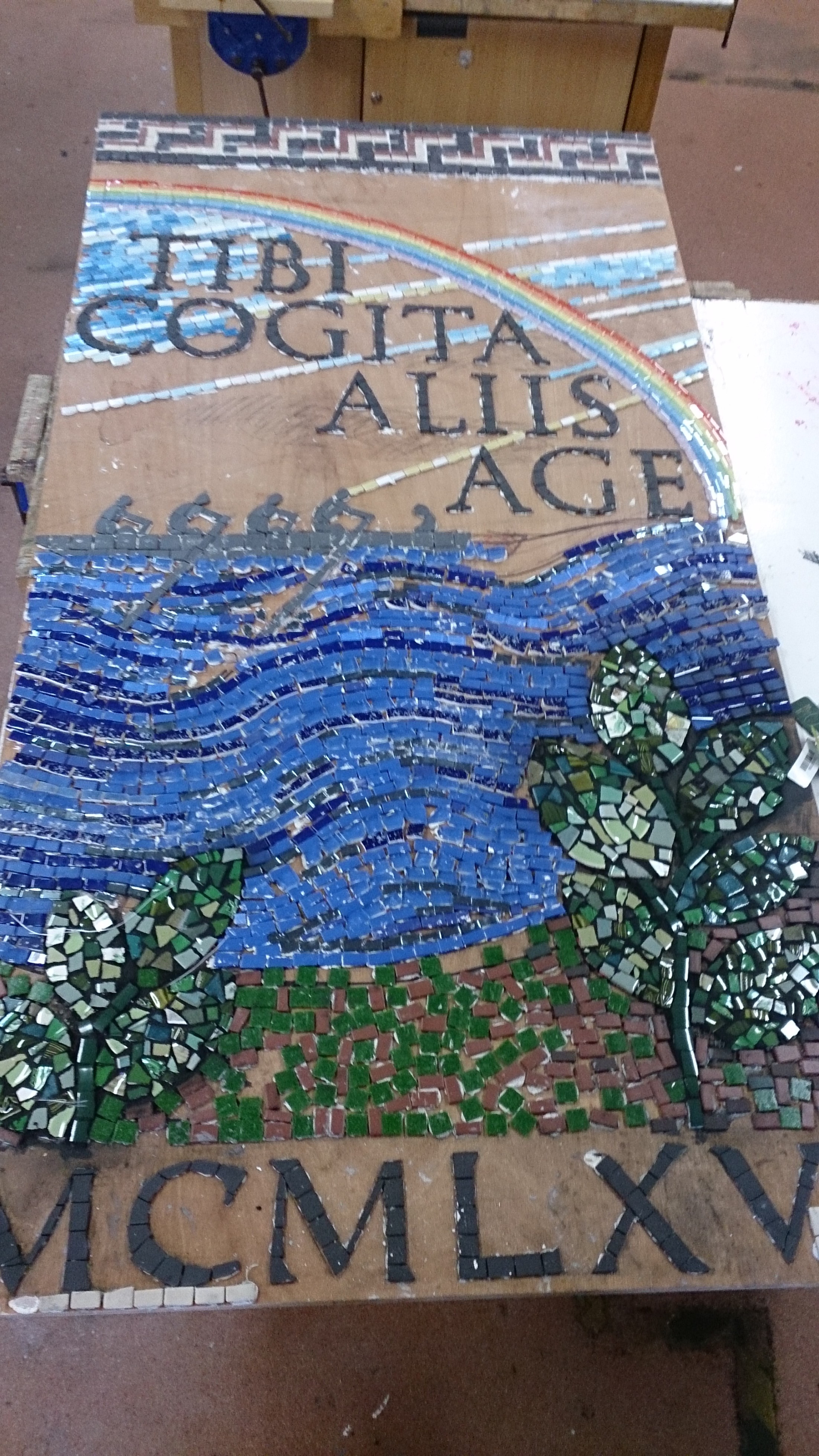 The sky was the last element of the mosaic to be created – there is a light source which flows in with golden tones from the right of the panels, then the rainbow, and darker, moodier skies on the left of the scene.

Once the tiles were all in place, the grouting process began. First, the groups grouted laurels in black grout so they stood out against the ground. Then the earth, buildings, and Iris were done in sandstone grout, and finally the sky was grouted in cream.This was swiftly followed by an intensive cleaning process - lots of elbow grease was required to make sure the tiles were clean and their colours bright!

Finally the mosaic panel edges were painted and sealed and it was ready to be put up after months of dedicated, meticulous work from our two fabulous teams of students from year 8 and year 9.

Congratulations to all the students who took part and helped to create a beautiful and lasting piece of public art which the school can be proud of!

Here are some comments from the students who took part:

“It was very organised and there was always something to do. Everyone knew how to do the mosaics and it was a really good opportunity. It was such a wonderful experience. I had so much fun and was happy to have been part of this unique project. I loved the trip to Chedworth especially and I would never have thought Romans and Greeks could be this interesting and fun! I loved this and would do it all over again” – Brighty Varughesekakkunnathu

“I really enjoyed mosaics, because there was always loads to do and we learned loads. We had lots of fun eating biscuits and chatting while we worked on the mosaics!” – Ella Mann

“The workshops were very enjoyable and really fun for everyone. It was also very interesting and informative to fund out how Roman mosaics are made” – Lana Pagnier

“The entire thing was great and we learned lots about mosaicing and we also learned some Latin! We often has interesting debates about colours, words and sometimes people!” – Beth Aveyard